On July 28, an estimated 9.6 million registered voters are expected to go to the polls in Cambodia. But, with no mechanism in place for absentee voting, almost 600,000 migrant workers currently estimated to live abroad are unlikely to cast their vote, according to election monitors and NGOs that work with migrants.

Those not voting include adult Cambodians, both illegal and legal, who are working in Thailand, Malaysia and South Korea, said Joel Preston, a consultant for the Community Legal Education Center (CLEC), a legal aid NGO that advocates for migrant rights.

“If they are Khmer citizens, they all have the right to vote,” Mr. Preston said. “The lack of absentee voting, which exists in Thailand and the Philippines, threatens the freedom and fairness of the upcoming election,” he said.

“The single most important factor in labor migration is wage. Hundreds of thousands of marginalized Cambodians have left this country for that reason alone,” Mr. Preston said.

Committee for Free and Fair Elections executive director Koul Panha said that Cambodians working abroad contribute greatly to the national economy through remittance, yet they do not have the right to vote.

END_OF_DOCUMENT_TOKEN_TO_BE_REPLACED

The ruling CPP agreed in principle to two of seven proposals put forth by the opposition CNRP on Monday during the first meeting of a joint electoral reform commission.

Emerging from a four-and-a-half hour meeting at the Senate, leaders of the CPP and CNRP working groups told reporters that they had agreed on the need to reform voter registration and create a new law on political financing.

A joint statement released following the meeting says the parties agreed to “organize voter registration and voter lists to guarantee and to protect people’s right to vote” and “organize the creation of a law on financing of political parties.”

The six-member delegations from each party agreed to continue electoral reform talks next Monday.

CNRP chief whip Son Chhay, who headed the opposition delegation, said the CPP declined to discuss five additional reform proposals until they had a chance to speak with senior CPP leadership.

Those points included reforming the composition of the National Election Committee and its local bodies, giving parties equal access to broadcast media, the creation of an independent body to settle electoral disputes, and measures to ensure the political independence of the military and civil service.

“They said [these points] have not been discussed among their leaders, so they asked to look into this for next time around,” Mr. Chhay said, adding that specifics of the reforms would be dealt with in later stages of the reform process.

END_OF_DOCUMENT_TOKEN_TO_BE_REPLACED 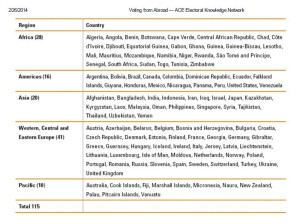 Post by Sochua Mu.
Please allow me to express my sincere thanks for your expressed concerns over the rounds of negotiations CNRP/CPP.
CNRP continues to demand:
1/ investigation of electoral irregularities;
2/ electoral reforms;
3/ re-election.
Results of the the first round of negotiation:
1/ the formation of a mixed committee from both parties to discuss technical issues;
2/ the participation and inputs from national and international organizations in the technical discussions, seminars and public forums on electoral reforms;
3/ international experts and financial support for electoral reforms.
Results of the 2nd round of negotiations:
1/ all Khmers will have the right to vote;
2/ a draft  law on party finance will be debated in parliament;
3/ electoral reforms which includes
Concretely, we have gained, so far:
END_OF_DOCUMENT_TOKEN_TO_BE_REPLACED

Petition Rally to Request the Right to Vote by Cambodian Overseas

Personally, I can say, I have permanently lived in Canada which is sharing the same moment with many Cambodian-Canadian friends, while many other Cambodians have permanently lived in the United States, Australia, French and Norway etc. Those have always regarded Cambodia as the beloved motherland. Their home mesmerizing doesn’t only express through emotion but engaging in larger activities such as donating money, organizing event to fundraise for social charity, preserving tradition and culture, spreading the value of Khmerness to local mainstream people, and participating with Cambodia political forum etc.

According to the database of the United Nations, in 1993 there were 360,000 Cambodian people were granted permanent status to live in foreign countries to refuge from war. During these 20 years, we can recalculate that there are approximate 450,000 to 500,000 expatriate Khmers living permanently abroad. Cambodia Daily reported on July 3, 2013 that there were almost 600,000 Cambodians working abroad lost their opportunity to cast their ballots. The report wrote that there are 500,000 legal and undocumented Cambodian workers in Thailand, 50,000 in Malaysia and more than 30,000 in South Korea.

The World Bank and the International Fund for Agricultural Development reported that Cambodian migrant workers in 2012 were estimated to have sent home $256 millions in remittances. Plus those Cambodians permanently living abroad have sent money back home to support aged parents, families, charity and to manage an investment, are not less than $250 millions per year. Nonetheless, researchers have found that diasporic communities helped shape policy and sometime constructed a permanent positive change of their home country. The wave of diasporic force has emerged since 100 years ago and it has furthered to present day. Some countries such as India and the Philippines, diasporas helped them to boost socio-economy through huge amount of remittances. For countries such as Israel and Armenia, regarded their diasporas as strategically vital political assets and they are the hope and the catalyst of change for their political affairs.