Political Paradigm of Pragmatism from the Khmer Youth part 62 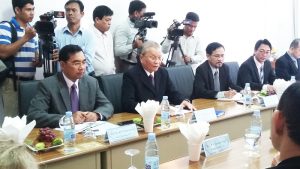 This part (62) broadcasted in April 24-25, 2016, Mr. Sophan Seng continued to articulate on the statement of HE Sik Bun Hok, president of the National Election Committee (NEC), to include migrant workers to register to vote and to vote per se in Cambodia upcoming election ie. commune election 2017 and national election 2018.

According to this announcement, it is a good news for migrant workers working domestically and internationally. Mr. President must state it clear that migrant workers in Thailand, South Korea, and many other places outside Cambodia could register and vote in their sites without interrupting to travel back to Cambodia to register as well as to vote.

Mr. Sophan Seng is appealing the President of NEC and NEC’s members to seriously articulate and implement the inclusive voters registration and to undertake the voting boots at their nearest places while working overseas. Further more, Mr. Sophan solemnly requested NEC to undertake Cambodians overseas absentee voting so that all those Cambodians overseas can actively participate in building the future of Cambodia.