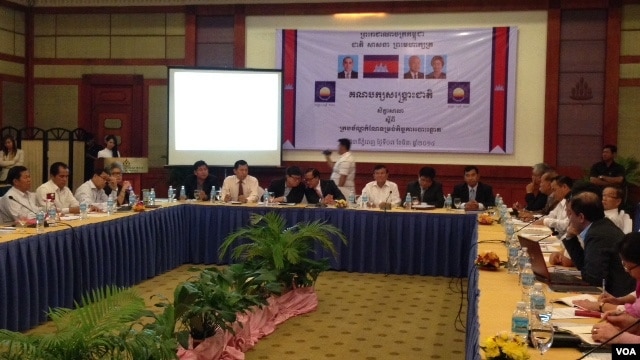 END_OF_DOCUMENT_TOKEN_TO_BE_REPLACED

A day after opposition leader Sam Rainsy said election reform talks were being “cut off” due to ruling party intransigence on the issue of National Election Committee reform, the opposition has asked the Cambodian People’s Party to officially declare its stance on the matter.

Senior CPP lawmaker Cheam Yeap told the Post on Wednesday that reform of the NEC – widely seen as beholden to the ruling party and blamed by election watchdogs for a number of issues that allegedly compromised last July’s election – would not take place this mandate.

But the Cambodia National Rescue Party has said it will wait for a response to a letter sent to the CPP yesterday before deciding to officially call off negotiations, the next session of which are scheduled for Monday.

“The [CNRP] understands that issues related to the reform of the electoral institution into an independent, constitutionally mandated body [that is] chosen by two-thirds of all National Assembly lawmakers is a necessary priority for election reform that cannot be ignored,” head CNRP negotiator Son Chhay wrote to his CPP counterpart Bin Chhin.