Letter to the Editor: Cambodians Overseas Have the Right to Vote

Regarding your article “CNRP Will Propose Changes to Allow Voting From Abroad” (August 7), the Committee for Election Rights of Overseas Cambodians (CEROC) would like to respond.

—Letter to the Editor— 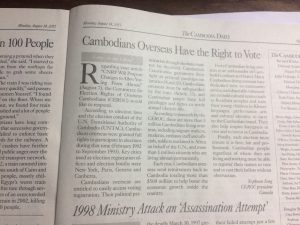 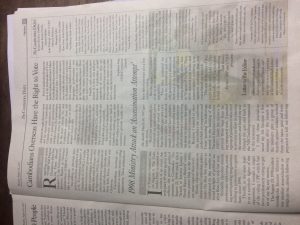 According to election laws and the election conduct of the U.N. Transitional Authority of Cambodia (UNTAC), Cambodians overseas were granted full rights to participate in elections during that time (February 1992 to September 1993). Key cities used as election registration offices and election booths were New York, Paris, Geneva and Canberra.

Cambodians overseas are entitled to easily access voting registration. Their political participation through elections must not be deprived. Cambodia’s Constitution guarantees their right to political participation (articles 34 and 35). Cambodians overseas must be safeguarded by the state (Article 33), and Cambodian people have full privileges and rights to settle abroad (Article 40).

According to research by the CEROC, there are more than 3 million Cambodians living overseas, including migrant workers, students, embassy staff and officials, soldiers stationed in Africa on behalf of the U.N., and more than 1 million citizens who are living abroad permanently.

Each year, Cambodians overseas send remittances back to Cambodia totaling more than $500 million to help boost the economic growth inside the country.

Every Cambodian living overseas is an ambassador of Cambodia’s culture and brand. Many Cambodians living overseas have dedicated time to community service and charitable volunteerism to build cultural centers such as Buddhist temples and train their young children in Khmer languages, performance arts and cultural identity, to carry on the Cambodian brand. They also help inspire foreigners to visit and to invest in Cambodia.

Finally, each election must ensure it is free, fair and professional. Cambodian people regardless of where they are living and working must be able to register their names to vote and to cast their ballots without obstruction. 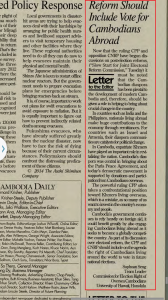 reforms, (“Slow Start for Joint Electoral Reform Commission,” March 4) it must be noted that the Cambodian diaspora has been pivotal to the development of modern Cambodia and, therefore, should be given a role in helping to bring about crucial change in the country. In countries such as India and the Philippines, nationals living abroad make huge contributions to the economy through remittances. For countries such as Israel and Armenia, their diaspora communities are catalysts for political change.

In Cambodia, expatriate Khmers have played an important role in revitalizing the nation. Cambodia’s diaspora was central in bringing about the Paris Peace Agreement, and today’s democratic movement is supported by donations and participation from Cambodians overseas. The powerful ruling Cambodian People’s Party often takes a confrontational position toward Khmers living overseas, which is a mistake, as so many of us want to invest in the country’s economy and people.

Cambodia’s government continues to rely heavily on foreign aid, it could benefit greatly by 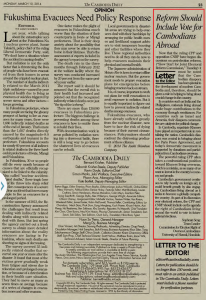 also engaging Cambodians living abroad as it seeks to become a globally competitive country. As part of its discussion over electoral reform, the CPP and CNRP should include on the agenda the right of Cambodians living around the world to vote in future national elections.