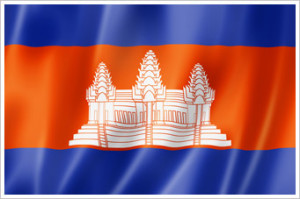 While he is riding on the Swing Gondola at the Calgary Stampede Festival, Mr. Seng Sophoan made an appealing to all Cambodians around the world to sign petition to demand for the Rights to Vote in Cambodia elections. His message is making clear that “no Cambodian citizen shall be marginalized from their full participation in social, economic and political activities in Cambodia”.

His team work is named “The CEROC” or “Commission for Election Rights of Overseas Cambodians” has been established since March 9th, 2014 and this volunteer-based organization has accomplished several things including nearly 3000 petition collections from around the world.

With this prospect, their right to vote is inclusive and NEC must not exclude them although they have lived or worked or studied in foreign countries.

At the end, he inquired the Cambodia NEC to prepare a National Election that is acceptable by international standard, be inclusive, free and fair, and receptive to universal suffrage.