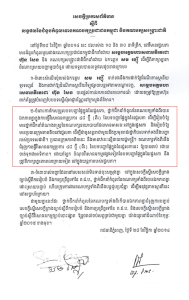 According to this agreement, the flexibility of the NEC’s Nine Committee Members is realistic. Many countries such as USA, Australia, France and Canada etc. allow its citizens to withdraw their citizenship by submitting application to the Immigration Ministry. Withdrawing and re-applying is feasible. It only takes time to go through with all the legal procedures. Suspension her France and Canadian citizenship is feasible for Dr. Pung Chev Kek in order to oblige her prestigious role as the Ninth Member of the NEC.
However, The CEROC is concerning the unalienable rights and accessibility to be able to vote in Cambodia elections. While the Nine Committee Members of NEC can vote to select the Secretary and Vice Secretary, they must be able to support all Khmer Overseas to vote as well in accordance to the spirit of Cambodia Constitution and Universal Rights Declaration of the United Nations.
However, the amendment of the National Constitution to paving way for Independent and Effective NEC must include some clause to clearly articulate that “All Khmer people regardless of where they are living, they must be able to vote in Cambodia elections”. Sam Rainsy at the National Assembly on Friday. Pha Lina

Rainsy to get rank ‘equal’ to PM

Opposition leader Sam Rainsy today obtained an analog TV license for his party and a future parliamentary position as the officially recognised minority leader, in return for a major concession on election reform to the ruling Cambodian People’s Party.

A joint statement released after a closed-door meeting between Prime Minister Hun Sen, Rainsy and high-ranking officials from both sides at parliament confirmed that the premier had agreed to grant an analog TV license to a private company on behalf of the CNRP.

It also says that both leaders had agreed that a new National Election Committee law being drafted by the two parties, along with upcoming amendments to the election law, would be completed by the end of February.

The internal rules of the assembly will be amended to officially recognise minority parties that win seats in parliament, with the minority leader to have a rank formally recognised as equal to prime minister, the statement says.

Rainsy has said in the past that he wants to see a Westminster-style shadow government in the National Assembly with an officially recognised opposition leader, but yesterday said what had been agreed was more similar to the US system.

“In the US, the minority leader has rights and privileges; his role is recognised and respected. Such an institution functions well in the US, so if we can replicate that system in Cambodia, it will be a good formula,” he said in a phone interview.

But even as the CNRP appeared to score victories on this and the TV license, it caved on a key demand that citizens with multiple nationalities be allowed to sit on a revamped National Election Committee.

Speaking to reporters after the meeting, CPP election reform negotiator Kert Rith said that citizens holding any nationality other than Cambodian would not be allowed to sit on the nine-member NEC, which is being overhauled following a political agreement on July 22.

“Both top leaders agreed with the condition,” he said.

The decision would seemingly rule out rights activist Pung Chhiv Kek, whom both parties had agreed in July could serve as the new NEC’s 9th “consensus candidate” but who also has French and Canadian citizenship, as a candidate.

But Rainsy claimed that the agreement would not necessarily mean someone like Kek would have to cancel their passports. Instead, he said, the NEC member would have to “kind of suspend” their nationality while they sit on the committee, though he admitted that he could not yet detail any legal procedure for how this would work.

“Once he has completed his mission and he stops being an NEC member, there must be a procedure to recover [the citizenship],” he said.

“We will ask US lawyers, international lawyers, French lawyers and diplomats and government officials to explain and help us find a solution.”

The opposition did get the CPP to agree that the appointment of the secretary-general and deputy secretary-general of the NEC would require a majority vote from NEC members. The CPP had previously wanted the NEC president to appoint those administrative positions.

In a statement providing more details on the TV licence, the Ministry of Information said it had seized an analog channel from an unidentified cable TV operator for the CNRP’s use.

Rainsy had complained earlier this week that the government had refused to provide his party with a TV license until a planned switch to digital broadcasting is completed, because there were no available analog licenses.

But late Thursday night, Information Minister Khieu Kanharith said in a message that an executive order had come from the premier to take back a license that had been granted to another company.

Today’s statement said that the switch to digital would take too long and thus Cambodian Independent Media, a company representing the opposition, would be given the analog licence when they formally apply.

The company will be given a 120m tall, 10 kilowatt radio tower in Phnom Penh and one kilowatt relay stations in the provinces, it said.

The opposition has long said that unequal access to broadcast media has impeded its ability to reach voters in the rural heartlands.