Overseas Cambodians Step Up Activism in Light of Gov’t Crackdown

In March, a group of Cambodians in Europe gathered to protest at the United Nations Human Rights Council office in Geneva, Switzerland, as the body was due to review human rights situation in Cambodia.

WASHINGTON DC — Cambodians living overseas have increased their activism since a government crackdown on dissent began last year, according to activists. 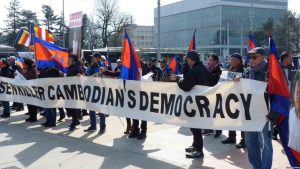 Last month, a group of Cambodians in Europe gathered to protest at the United Nations Human Rights Council office in Geneva, Switzerland, as the body was due to review human rights situation in Cambodia.

Other demonstrations took place in the days leading up to the meeting, in Sydney, Australia, as Prime Minister Hun Sen attended a summit of Asean and Australian leaders.

“We, the Khmer people living abroad, do not forget our motherland and what’s happening there,” said Thay Makara, a Khmer community leader in Europe. “With social media, the connection with our countrymen remains close. We feel miserable to see our people suffer abuses.”

Activists have organized public forums and met their representatives in the United States and Canada to urge them to apply diplomatic pressure on Phnom Penh.

“At this point, our strategy is to demand a review of the Paris Peace Agreement in order to have a free and fair election, not the Russian-style one,” said Seng Sophoan, president of the Committee for Election Rights of Overseas Cambodians (CEROC).

The Vancouver-based CEROC has been working for years to demand voting rights for Cambodians overseas.

“What we have been doing is to urge donor countries to review the Cambodian government’s recent actions,” said Men Vannak, another community organizer, from Lowell, Massachusetts. “This government abuses democrats, civil society groups, and the opposition party.”

Cambodian community leaders from around the world gathered in Melbourne, Australia, for a three-day conference to discuss ways to tackle the challenges facing Cambodia in terms of its growing economy and society, including health, education, rural development, migration, and immigration.

Hong Lim, a member of the Victorian Legislative Assembly and the main organizer, hoped that the “World Khmer Conference” would find a way to address these challenges, which he considered “terribly troublesome” issues.

“We, the owners of our country, must be brave to face these challenges,” Lim said. “We must dare to find a solution together.”

The Economist Intelligence Unit ranked Cambodia’s democracy at 124 out of 167 countries, down from a “hybrid government” to a “dictatorship”, after it dissolved the main opposition party.

Many opposition politicians have fled the country to escape persecution and to continue their political activism, while some of their colleagues remain in the country.

“These are peaceful and non-violent protests by Cambodians overseas,” said Kuch Schanley, an independent analyst in Maryland. “The worrying trend is that the Cambodian government will continue to do whatever they want. They don’t want to listen to demands by people in and outside of Cambodia.”

“I believe that Cambodians inside the country can play a significant role, too, since the conflict is actually there,” he added.

Schanley said that overseas Cambodians from the US, Australia, Germany, Canada, and France, cannot fully help them alone.

“Once Cambodians inside the country call for external help, they should help themselves, too,” he said. “They have no strength and resources, but their compatriots outside can shake up the international community to provide protection so that they can overcome their fear and stand up to protect their national interest.”

Cambodia plans to hold a general election on July 29 and the international community has called for a “free and fair” election with the participation of the CNRP and the release of Kem Sokha.

“Now, the time is running out for the election scheduled for July 29, 2018, and the Cambodian people are very concerned that the democratic regime and the respect for human rights fall in the country,” said Makara, the Europe-based community leader. “We will continue to demand [this] until everything goes back to normal, and our country becomes a democratic country and respects human rights.”

Last month, a group of 45 countries led by New Zealand issued a joint statement condemning the government’s move on the opposition and civil society.

The European Council has asked Cambodia to adhere to the spirit of the Paris Peace Agreements and the election results in the past and has warned of the possibility of removing its preferential trade status.

The United States has imposed a visa ban on senior government officials. Five influential US senators have also introduced a bill called The Cambodia Accountability and Return on Investment (CARI) Act, which would impose additional sanctions on the Cambodian government.

“I think that was one of the ways that we can put pressure on Hun Sen and the government of Cambodia to change their policy,” Sen. Dick Durbin, one of the co-sponsors, told a gathering of Cambodian-Americans in Chicago, Illinois in March.

He added that the United States has more mechanisms to put pressure on Cambodia.

“But I’d say if do not get a response from this, we should take this up at the United Nations to gather more nations around the world supporting us,” Durbin added. “And then if that does not work move it to the sanction level when it comes to trade, when it comes to the relationship between the two countries. Those are things short of war, short of military [action], but that continue to build the pressure on the government of Cambodia.”