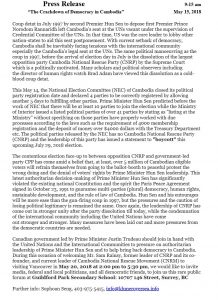 Coup detat in July 1997 by second Premier Hun Sen to depose first Premier Prince Norodom Rannaridh left Cambodia’s seat at the UNs vacant under the supervision of Credential Committee of the UNs. In that time, US was the core leader to lobby other nation-states to aid this seat postponement. With current setback of democracy, Cambodia shall be inevitably facing tensions with the international community especially the Cambodia’s legal seat at the UNs. The same political manoeuvring as the coup in 1997, before the arrival of election day in July is the dissolution of the largest opposition party Cambodia National Rescue Party (CNRP) by the Supreme Court which is a politically motivated. Many scholars and political observers including the director of human rights watch Brad Adam have viewed this dissolution as a cold-blood coup detat.

This May 14, the National Election Committee (NEC) of Cambodia closed its political party registration date and declared 4 parties to be correctly registered by allowing another 5 days to fulfilling other parties. Prime Minister Hun Sen predicted before the work of NEC that there will be at least 10 parties to join the election while the Ministry of Interior issued a listed political parties of over 41 parties by stating as “listing at the Ministry” without specifying on those parties have properly worked with due processes according to the laws such as the requirement of 4000 membership registration and the deposit of money over $4000 dollars with the Treasury Department etc. The political parties released by the NEC has no Cambodia National Rescue Party (CNRP) and the leadership of this party has issued a statement to “boycott” this upcoming July 29, 2018 election.

The contentious election face-up to between opposition CNRP and government-led party CPP has come amid a belief that, at least, over 5 million of Cambodian eligible voters will refrain themselves from going to the ballot-booth to peaceful protest the wrong doing and the denial of voters’ rights by Prime Minister Hun Sen leadership. This latest authoritarian decision-making of Prime Minister Hun Sen has significantly violated the existing national Constitution and the spirit the Paris Peace Agreement signed in October 23, 1991 to guarantee multi-parties (plural) democracy, human rights, sustainable development, and the rule of law of Cambodia. Hun Sen and his entourages will be more ease than the gun-firing coup in 1997, but the pressures and the caution of losing political legitimacy is remained the same. Once again, the leadership of CNRP has come out in stronger unity after the party dissolution till today, while the condemnation of the international community including the United Nations have come out stronger and stronger. Many measures have been laid out and more pressures from the democratic countries are needed.

Canadian government led by Prime Minister Justin Trudeau should join in hand with the United Nations and the International Communities to pressure on authoritarian leadership of Prime Minister Hun Sen and to help bring back democracy to Cambodia. During this occasion of welcoming Mr. Sam Rainsy, former leader of CNRP and its co-founder, and current leader of Cambodia National Rescue Movement (CNRM) to visiting Vancouver in May 20, 2018 at 2:00 pm to 5:30 pm, we would like to invite media, federal and local politicians, and all democratic friends, to join us this rare public forum at Guildford Park Secondary School: 10707 146 Street, Surrey, BC

Press Release on Public Forum in Vancouver, BC in pdf